Interview and Give Away with Janet Allison of Boys Alive! Summer Solstice

The Return of the Sun King

Once upon a time, there was great sorrow among the fairy folk. Something had happened to the Fairy Queen, Titania. She had fallen asleep and would not wake up.

The winter had come, terribly cold and full of ice and snow. In the fairy wood, no fires were burning. The seed babies were safely tucked in their beds, deep under Mother Earth’s coverlet of leaves and moss. The gnomes and dwarves were working deep underground. The water sprites waited under their ice roof, which covered the crystal lake and bubbling brook.

Most of the fairy folk, those who tend the flower children in meadows and forests, were left to wander through the winter, seeking warmth and shelter. They sought these in the homes of mortals, hoping to rest beside the fires both in castle and in hovels. Where ever fairy stories were being told at night or where ever Christmas candles were burning, there they were allowed to rest awhile.

This winter, the Fairy Queen and her troupe had been wandering and wandering. The snow blew in great swirling clouds and Old King Winter laughed and crackled. Jack Frost had a jolly time pinching their noses and toes. Worst of all and sad to say, there were not enough resting places for the fairy troupe. Most of the stone castles were dark and deserted and had been so a long time. The houses, great or small, where real fairy stories were still being told were few and far between. And the Christmas Candles burned in but a few windows. 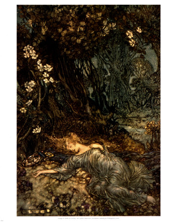 One very dark night, after Yuletide, but long before Spring was due, the Fairy Queen began to grow very sleepy, as mortals do
when they begin to freeze. Not being a mortal, she could not die but she could not wake up either. All of the fairies tried to wake her up. They danced and fluttered around her and sang songs as loudly as they dared. At last, with the help of two white snow-hares they managed to bring the Queen back to the stone circle, which is their palace and dancing place. Without their Queen, the fairies were entirely without direction and purpose. Many also fell asleep and the ones who stayed awake were mournful and very miserable. 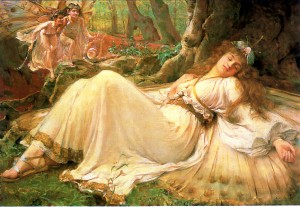 North. The ice melted and gentle rains fell. Seed babies began to awaken and the first flower children appeared. The fairies grew hopeful and hurried to bring Lady Spring to the bed of her sleeping sister. Lady Spring took Titania’s hands and breathed the promise of Spring over her. She sang her magic song of roses and butterflies, of newborn lambs and nightingales. Titania’s cheeks grew rosier and she seemed to breathe more fully than before. But alas! Her eyes would not open, nor would she speak!

Lady Spring grew sorrowful and this brought a tremendous Spring storm. She had to dry her eyes quickly so as not to bring on a flood. She took leave of Titania’s attendants, saying, “I must continue on to waken all of the seed babies. Guard your Queen well and wait for Summer.”

The fairies promised to do their best, but in truth, the seed babies and flower children were not taken care of as well as they should have been.

Day by day, the fairies could see the ascent of the Sun King on his fiery steed. He was still far away, just over the horizon. Little by little he came closer and the day began to grow longer than the night. Finally, it was Midsummer’s Eve and the Sun King reached the pinnacle of the sky. He was riding very high over the palace of the Fairy Queen. The fairies shouted and clamored, pranced and danced, trying to catch the Sun King’s attention. He was too high up to hear them, but he soon noticed that the Fairy Queen had not come to greet him on this, their meeting day.

The Sun King turned his steed toward the Earth and came as close as he could without harm. Of course, everything grew tremendously hot and the flower children took refuge under the broad leaved trees and bushes. 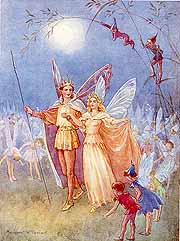 Still, Titania did not wake up. Here hands and feet were still icy, although her hair shone golden in the brilliant light. Then the Sun King took off his mantle of fire and climbed down from his sky horse. Without the fire mantle, he would not scorch anything or anyone. Still, he was almost too bright to look at! He came to the Fairy Queen’s couch and he bent down and kissed her. He took her hands in his and felt them grow warmer and warmer. She opened her eyes and drew a long breath. She arose with all of her sleeping companions.

What rejoicing there was! Such a shouting and singing! Each fairy nurse ran to find her poor neglected flower child.

Titania thanked the Sun King for bringing her back to life. She told him how dark and cold the winter had been. She wondered what to do the next time King Winter’s might was stronger than human love and light.

“Do not fear,” said the Sun King, “For the darkest winter has passed and Winter’s power will someday be totally overcome. Human beings will remember to light their fires again. The Christmas candles will burn brightly in many homes and around the hearths, real fairy stories will be told again. I myself will proclaim this from the skies. For the light of the world has come to birth in human hearts and this can never again be extinguished.”

Then the Sun King mounted his winged charger, put on his fire mantle and rode back to the summit of the sky. The fairy folk waved him on his journey with love and gratitude.

That Midsummer night, they held the most joyful festive there ever was in all of fairy land. And if the lights have not gone out, they are dancing still. 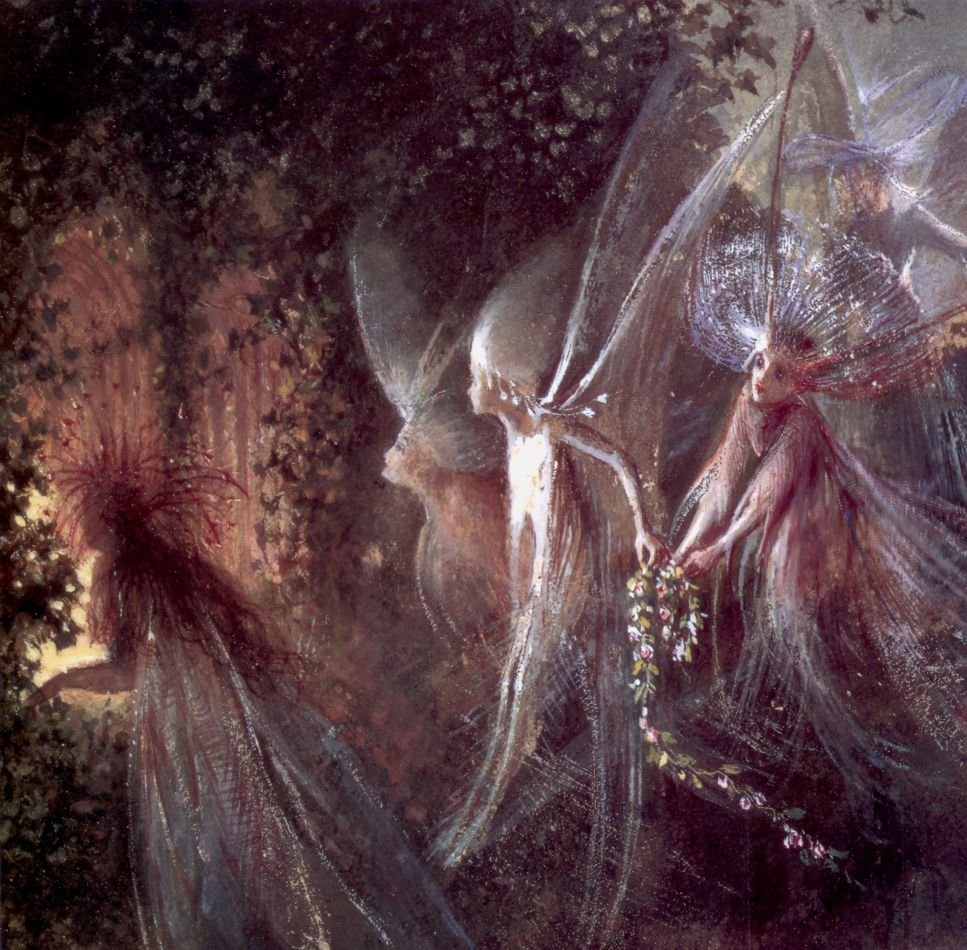 The Fairies at Christmas

The fairies at Christmas

From cavern and mountain

Through forest and fancy

They skipper and scamper

Round each human hearthside;

It beckons and whispers

In each fairy ear,

The people are singing;

Are telling the story

Your gifts for the Christ Child

Whose Being you prove.”

The stars shine with glory

And inside, the fairies

Christine Natale discovered Rudolf Steiner and his work at age 16 through a summer job in the Biodynamic Gardens at the Threefold Community in New York. After two years of community college in the area, Christine embarked upon a two year journey with her mentor, Rene Querido.  Lucky enough to be in a small training class, Christine was able to intern at the Sacramento Waldorf School from the first of December through June with full block training experience in almost every grade and Kindergarten. Christine taught for about ten years, primarily in the Kindergarten, with one year taking a combined Fourth and Fifth Grade. During this time, she has given many lectures to the public, produced puppet theater and festival productions, co-directed young schools and been an active resource for Waldorf parents and their children.

More recently Christine has been focused on her writing. She has produced an extensive collection of children’s stories and articles on Waldorf Education and is in the process of self-publishing them. Christine brings a variety of skills in all of the arts, such as Waldorf Watercolor Painting, Crayon Drawing (and its interpretation), Handwork, Music, Drama, Puppetry, Storytelling and much more. She has a broad and deep base of knowledge of Anthroposophy and Waldorf Education, as well as a good familiarity with other educational systems and methods and an ability to draw connections and to build bridges of understanding for people who come from a wide variety of backgrounds.

Copyrigh 2011 The Wonder of Childhood

If you enjoyed this article, please consider sharing it!

4 Responses to The Return of the Sun King